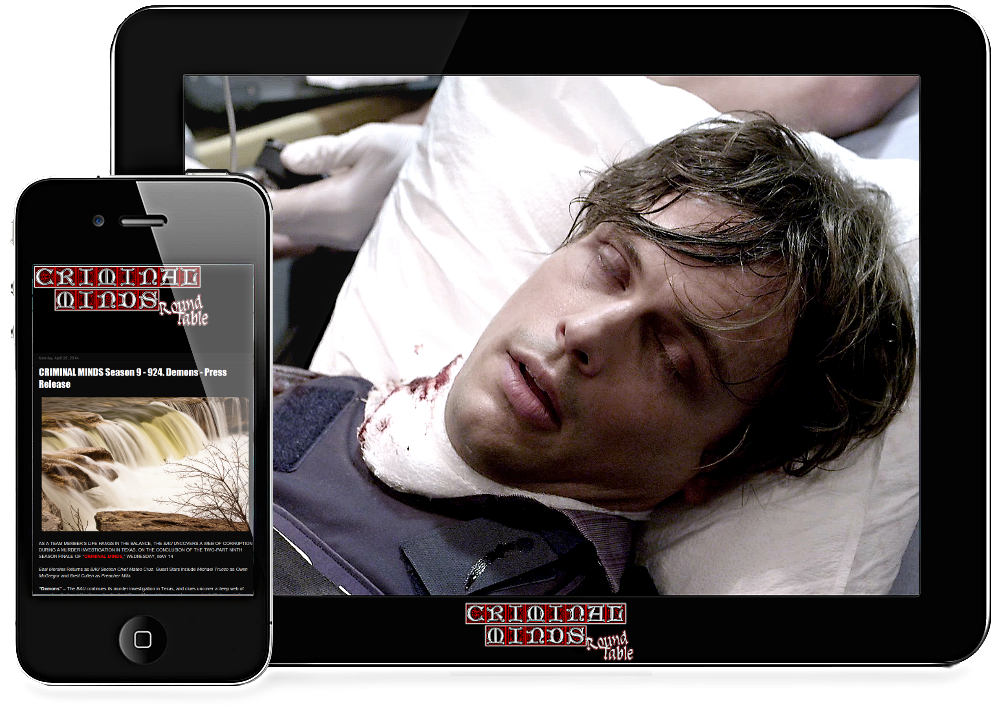 This thread is open for you all to post comments and talk about tonight's new CRIMINAL MINDS episode, titled 'Demons' and written by Erica Messer.

Hope you've enjoyed today's episode, and remember that this was the Season Nine Finale! See you all commenting here the new Season Ten episodes, which once again will air on Wednesdays at 9 pm on CBS, next September!
Posted by SETW at 8:42 PM 65 comments:

To Read More: TVGuide.com
Posted by Criminal Minds Round Table at 7:46 PM

Well my friends, here we are at the end of another season of Criminal Minds. And let me just say, this episode lived up to the hype that was running rampant over Social Media… We had great 'team' action and profiling. We had NO idea who the unsub was or could be until the very last minutes of the episode. And as this is a bit of a cliffhanger we still don't know the depths of who is involved with this whole debacle.

Episode opens with a very terrified woman begging for her life. Creepy yes, but hey that's Criminal Minds for you.

I have to say here that Rob Bailey did an excellent job directing this episode. And Rick, Breen and Janine did an equally excellent job of pooling their talents on the writing. 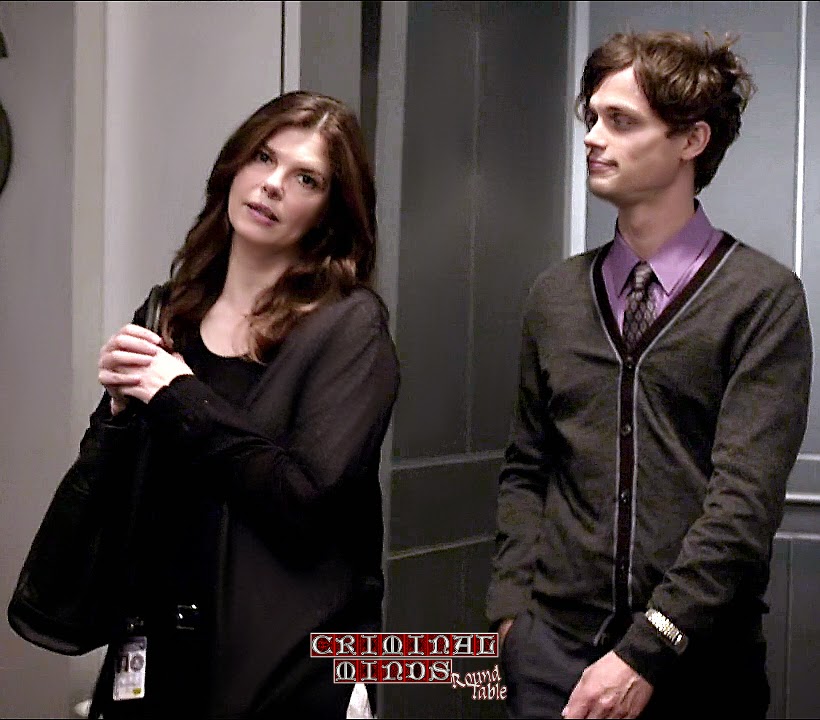 Our first look at the members of the BAU is as they are coming in because of emergency call from Hotch about a case. Alex Blake confides to Reid about issues with her husband. Blake's reference to her husband watching House Hunters was priceless. (Ummm guys is this what you do on your spare time, or are the writers reading tweets when posters are discussing watching House Hunters!) The scene as the team waits for Hotch to explain why he called them in so early is very cute. When JJ was complaining about 'alone time for her and Will' I felt like saying “Welcome to the club.” The scene was well done and not too overly cheesy. 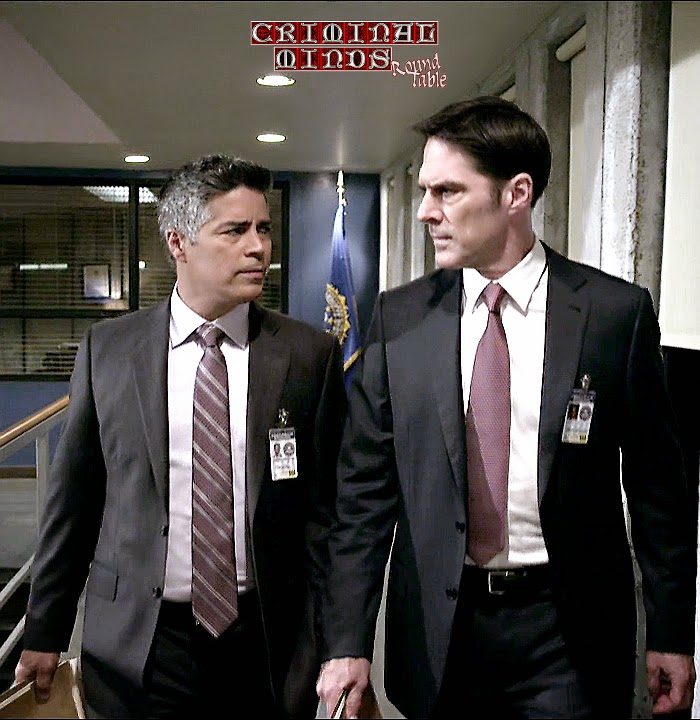 I loved seeing Cruz's unilateral support for the BAU with his comment to Hotch about 'Why mess with success?' Now the scene with Cruz taking over the presentation was sappy yes, and annoying on Cruz's part, but HA! Garcia got the last laugh when she had to take over for him. (Way to cover all the religious bases Penelope!)

We find out that this case has come to them from a friend of Cruz's. OK, that's been done before but I liked it. The team's roundtable and in flight discussions were classic Criminal Minds where everyone had something to share regarding the case. Hotch while not saying a lot was typical of himself and processed what the others were saying finally giving orders on where the team should go once they land.

I liked the pairings that Hotch put together. Alex and Rossi to the ME's office. Reid & Morgan to the streets and he and JJ to the precinct. For me these worked very well. And JJ was allowed to be more of the JJ of old by interviewing the sister than she has a good part of the season, which I liked. 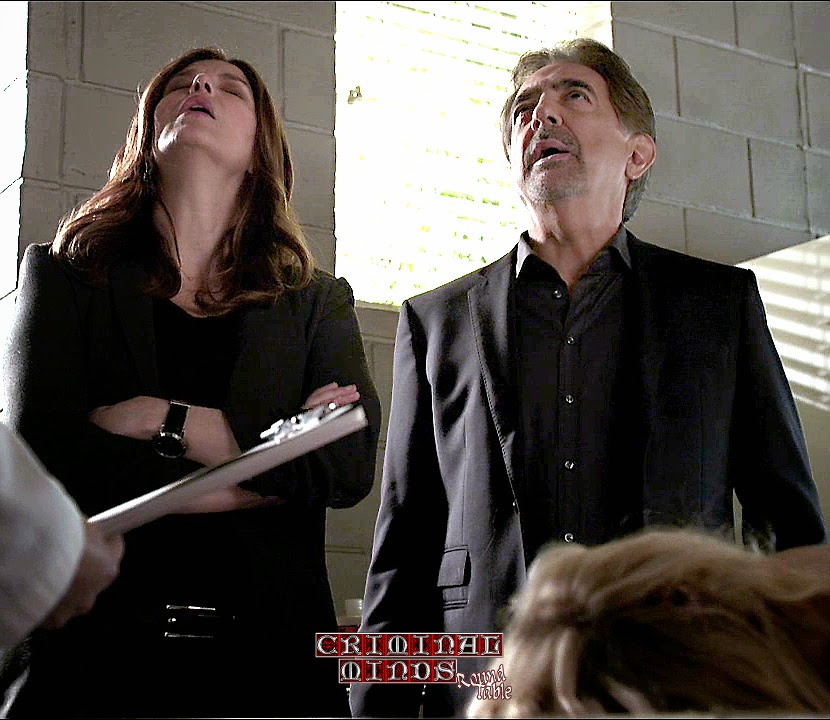 Now, I must say my favorite funny scene was Blake and Rossi at the ME, did anyone besides me just want to smack that bozo? The actor portraying the ME was very good for the role. Blake and Rossi's eye roll and simultaneous answer was just perfect.

All the team was spot on in their interactions with the locals and their profiling. I enjoyed seeing Morgan being all 'that' when he was trying to help the hooker in the bar to open up. I also liked how Reid and Morgan picked up on Dinah, the bartender's ever watchful glare at the young woman. JJ talking to the sister of one of the victims gives us a sense that this case is bigger than it looks. The local cops seemed to be over the top helpful, but by the end of the episode (promo for part 2) we discover why.

The Preacher... what can I say? Every bad 80s evangelist stereotype rolled into one sleazy package. Brett Cullen was fantastic in his portrayal of Preacher Justin Mills.

As the case progressed I was kept on the edge of my seat trying to figure out all the direction and misdirection that the writers and director were throwing at us. What a beautiful job they did. (Just had to get that in here again). Again I will say, the writing for the Team was spot on, as well as the guest cast. 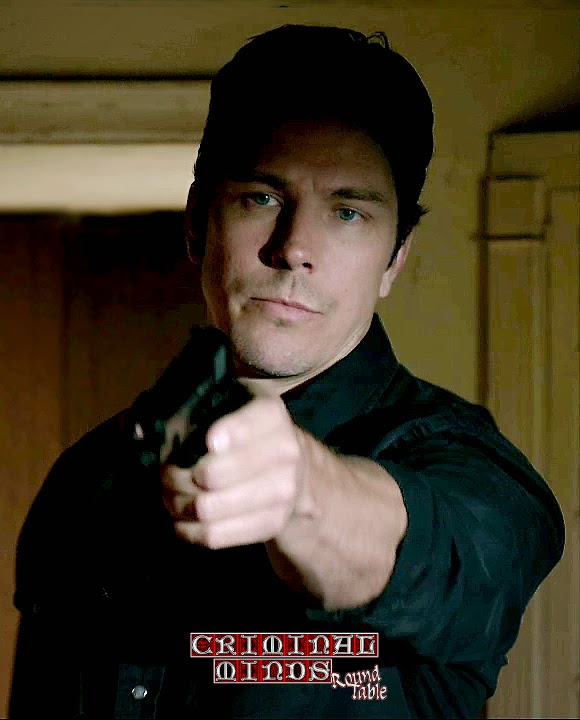 I won't dissect the entire episode because well, quite frankly you all have watched it, and I don't need to repeat a good thing. I will say that I was waiting to see when, and who, Michael Trucco would show up as, and when he was revealed I was like. “Wow, OK, you're creepy scary.” As it turns out by the end of the episode we find out that Trucco is indeed the unsub, and apparently he's leading a whole 'not so merry' band of unsubs. Seems like everyone in this town is in some way involved with this mess.

Now to the heart stopper of the episode. The Preacher freaking out because he knows he's been framed. That wild shoot out. WOW!!! How many local cops went down? And upon re-watch I realized that the whole shoot out was started by Trucco's character Owen McGregor from behind bushes (Umm guys, this creep really needs to die). McGregor then shooting Coleman in the head as Blake and JJ tried to get him to safety was sad, Coleman seemed like a good cop and man. Reid and Morgan getting shot had me going “OH MY GOD”. I loved that Reid apparently got shot going to the aide of Blake. So typical of what this team, this family would do for each other. Morgan being shot in the restaurant, going down, and fade to black, just left me speechless. I can't wait for next week's episode to see the aftermath.

So I will leave you all with this. I give this episode a 10 out of 10. It had action, it had drama, and it had some comedic relief. If you weren't on the edge of your seat the whole time, you were probably sleeping (shame on you).

To Rick, Breen and Janine: Thank you for a wonderful start to the season finale. Look forward to your works next year.

To Rob Bailey: Thank you for a wonderfully directed episode and helping this long time fan find her 'love' for Criminal Minds again. All of you gave me what for me was missing the last few episodes. Which was great solid teamwork, great profiling, and edge of your seat suspense. Hats off to all!

To the Cast: What can I say, but Thank You all so much for 9 amazing years? Looking forward to S10 and beyond!