Source: OnTheRedCarpet.com
Posted by Criminal Minds Round Table at 9:39 AM 1 comment:

We, the Knights and Ladies of the Criminal Minds Round Table wish to heartily congratulate the Cast, Crew, Writers, Producers and Fans of Criminal Minds for reaching, and soon surpassing, the wondrous and joyful, milestone 200th episode. 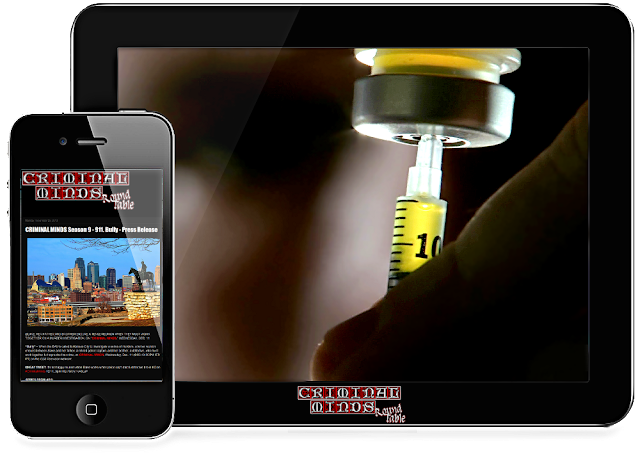 This thread is open for you all to post comments and talk about tonight's new CRIMINAL MINDS episode, titled 'Bully', and written by Virgil Williams. 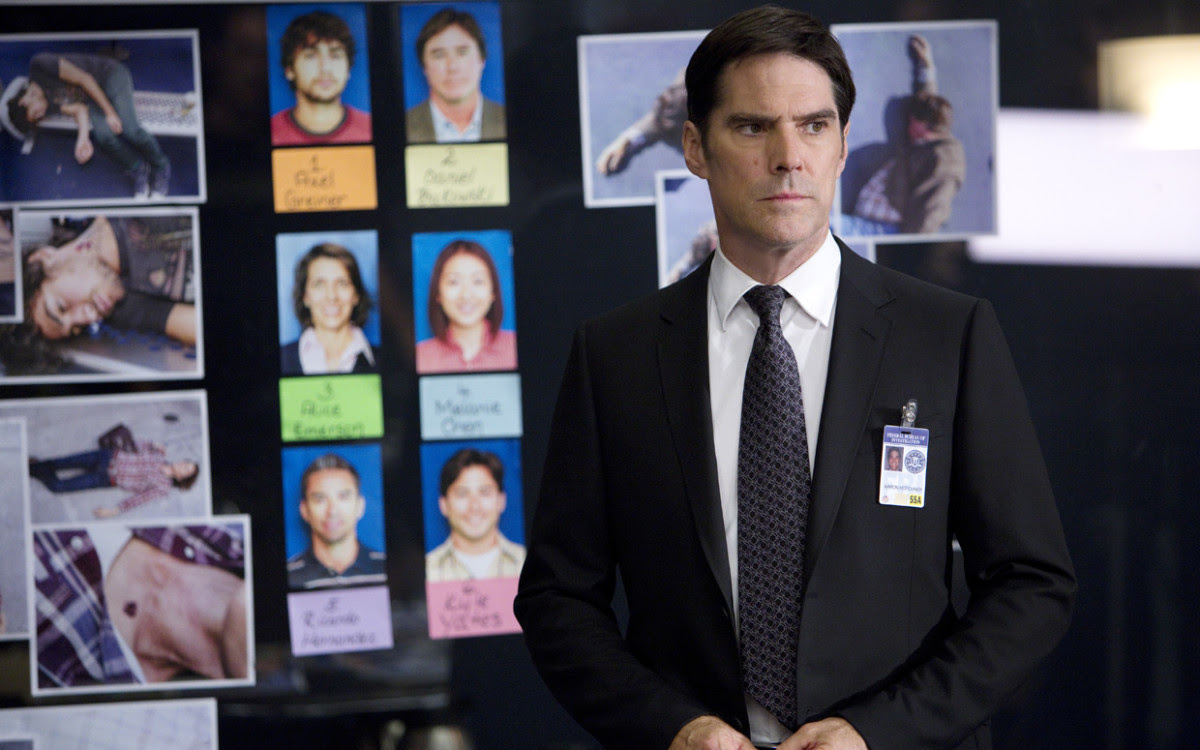 Thomas Gibson rose to fame playing Dr. Danny Nyland on the 1994 CBS medical drama Chicago Hope, but he gained true stardom with his turn as Greg Montgomery on the ABC sitcom Dharma & Greg. After two Golden Globe nominations for his work on that show, Gibson found his way back to CBS in 2005 as Supervisory Special Agent Aaron Hotchner, alongside Mandy Patinkin, Shemar Moore, Matthew Gray Gubler and the rest of the FBI’s Behavioral Analysis Unit. Gibson has been a mainstay on the hit series ever since. Now in their ninth season, and preparing to air their 200th episode in February 2014, Criminal Minds is just a good as, if not better than, it has ever been. Parade sat down with Gibson to discuss the show, Mandy Patinkin's early departure, missing comedy, and what's to come for Criminal Minds.

How nice was it for you to have Meredith Monroe back in the recent episode “Route 66”?
It was great. And Tommy Howell [C. Thomas Howell] as well. To have it mixed up [so that] only a dream allows it to happen that way was really great. It was a really imaginative way to deal with it all. To check in on the kind of progress that Hotch has made in living with [the death of his wife], moving on from it, internalizing it, or shoving it away and not dealing with it because he's got too much on his plate as far as raising Jack and also keeping the team focused. It asked all those questions in a really compelling way that was a lot of fun for me to work on, and I think fun for Meredith and for Tommy as well.

Do you think that's it now for Hayley? Do you think Hotch can finally fully move on?
Yeah, I think so. I can't imagine that it's going to be completely smooth sailing, but I think being able to see her in his mind was something that was necessary and probably will stay with him. I think that this dream will be internalized and will help him in a lot of ways. To have her say to him which, of course, is him saying to himself, “It's time to move on and it's OK,” is important to remember.

Criminal Minds has always been labeled a “procedural,” but it does a really good job of balancing serialized, longer-arc stories with more episodic, monster-of-the-week stories. Which do you prefer?
They both have their advantages. I think the conception of the show was as a procedural, but I think the execution of the show has been something different. The whole procedural form seems to be that we don't really know who these people are. We only seeing them doing. We don't see them being. And the work that these people do begs the question...

And after reading the whole interview, come back for...

Writer Scott Neumyer (follow him at @scottneumyer to find more of his work) has shared with us the Q&A that had to be cut from the Parade article due to space constrictions.

Q1: Who’s the better golfer? You or @JoeMantegna?
A1: “Oh, you know. I couldn't even… I would say I've put in a little more time, but neither of us unfortunately is at the top of his game right now. We have played together… We love playing together, but I just haven't had time to play much lately. Joe and I haven't gotten out there in a while, but we have to.”

Quote from Thomas: “I was at a place in Silver Lake the other night and @EricMcCormack was there as well… I've signed pictures that people have given me that are [@EricMcCormack] and vice versa, so we exchanged stories. I worked with him before Will & Grace was on and he’s a great guy. We've definitely swapped some headshots over the years.”

Thomas: “It takes 8 takes to shoot 42 minutes. People are always asking what takes so long.”
Scott: “Well, it takes you 3 hours to get @shemarmoore to put his shirt back on so you can shoot a scene right?”
Thomas: [Laughs] You must've been on set before!! [Laughs]”

Scott, THANK YOU SO MUCH for sharing this with us, the fans!

Posted by Criminal Minds Round Table at 12:14 AM No comments:

you never know who will be on the other end...


CBS released another new episode of Criminal Minds titled “The Caller” (written by Sharon Lee Watson, and directed by Rob Bailey) investigating a young boy who goes missing from his home in St. Louis in the middle of the night, and the distraught parents who find themselves getting disturbing prank calls from a child saying he was going to get them at the same time. The BAU soon find out that this case striking a similar to another cold case several years ago.

The masterminds behind this episode brought you a different take on what you'd usually expect from the show. Like the previous episode, it was creepy, but this episode was very different from the usual formula... and it worked!

In the beginning of the episode, the audience isn't given who is the unsub right away. There was no watching the unsub go after multiple victims or after a particular member of the team. 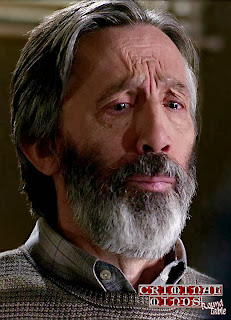 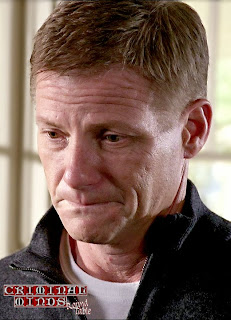 The story was still able to keep the audience on the edge of their seats. I wasn't sure who was the culprit. For almost 30 minutes into the story. I was sure that the short tempered, overly controlling father was the unsub until his wife went missing next, and he was being taunted on the phone by the same prank caller when it happened. In the older case, the father was suspected as well, and was even interrogated during the investigation. Was it really him, or just a very elaborate copycat? The evidence pointed to the father again, just like last time. But could it really be him? Hotch and the gang find out that the recordings are exactly the same as the previous case. It ended up being a recording of the unsub's voice when he was a child from an old home movie.

In the mean time, Andy, the current missing child was found dead. Turns out, the unsub identified with the child and saw the kills as mercy kills, as he thought he was sparing the children a fate worse than death: staying with their parents. He saw Andy's parents and the boy before him, as surrogates for his own and had been trying to save the boys. 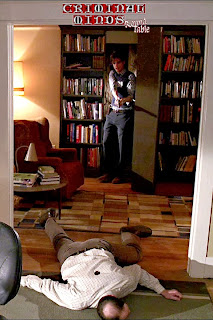 Although the story didn't directly center itself on any the members of the BAU, I was particularly pleased with the ending when Reid saved Blake by killing the unsub instead of someone saving Reid. That character is slowly growing up.