Last time I reviewed a Kim Harrison penned episode I told you that I went about watching them with very low expectations. This time, after the disastrous "profiling" she offered us in Awake, not only my expectations were below zero, but I was dreading to have to watch it.

Before I delve into my thoughts on The Bond script, want to talk about the director. Hanelle Culpepper did a great job, and earned to have her job highlighted. From the transitions between scenes, the sound effects (more remarkably, the echo of the voices of Rossi and JJ while talking inside the big, empty public restroom), her camera angles, and what she selected to show of the crimes, and more important even, what she selected NOT to show (barely any gore, barely any violence; only subtle hints and flashes of what was going down). An all around excellent work, congratulations!

Want to highlight too the two aspects that I wasn't expecting to be disappointed with, and that effectively were as good as ever:


The problem this episode has is the tired, overused, over-complained about...

WE knew too much,
too soon,
from the wrong source, the damn Unsub!

...so the work of the team looks like - again - as an afterthought.


I don't feel like beating my head on a concrete-covered brick wall, so I'm going to try a different approach to explain this... again!

Let's use our imaginations.

Let's imagine this episode without certain moments/certain too revealing scenes until after the moment the team had dug out all the information they could, by profiling the crime scenes and by profiling the victims, until the point when they got the correct answer, the Unsub's name.

In doing so, every interaction with Mother and Son would give us, at first, the idea that they were important to the plot, and sympathetic enough, but obviously unconnected to trucks, trucks stops or anything related to either. I can imagine myself thinking:
- Are they the final intended victims?
- Are they the Unsub's stressors?
- Is the Unsub the mysterious, missing-from-the-family-picture biological father?

Revealing how controlling the Mother was would have been truly shocking.

Seeing the Son's aborted strangulation of his fiance would have been mind-blowing.

Discovering that the Mother had been behind bars all that time... I was surprised on first viewing, can't even begin to imagine my reaction if I would have seen that when I still cared...

Cut the parts of the dialogue/the scenes that reveal he was the killer. Make us think that his medication is to cover a different illness (a depression, for instance, would have fit with his general air of sadness and his sleeping on the couch in the middle of the day). 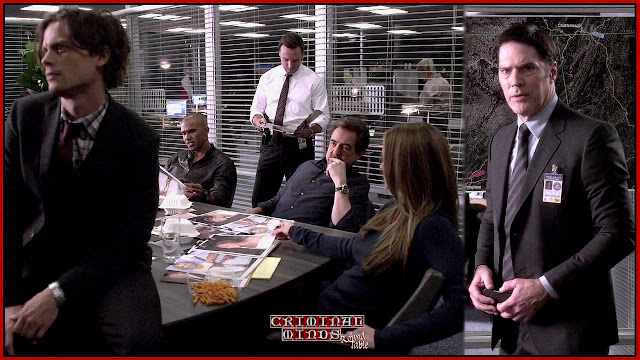 Expand the profiling, the work the team is doing. Because this time the work of the team was good, the profile was constructed well, starting with general ideas that were discarded or accepted as they uncovered the details of the different murders, and following with an in-deep study of the victims, which made them go from random people to all-are-connected-to-a-pattern-and-history people, that ultimately lead them to a single suspect and his name.

Each and every reveal would have moved us to sit more and more toward the edges of our seats, would have left our jaws hanging more and more, and certainly our eyes wouldn't have moved from the screen for a single second in fear of missing what was coming next.


Have to say that I liked the symmetry of the final scenes with both, Mother and Son, in their respective confinements, seeing how very much alike they ended being. Only thing I felt was unnecessary was the image of the cut ear, the image of the damage the Son had inflicted on himself with the blood running down his neck was more than enough. Still, this would have been a detail I could have happily overlooked if the episode as a whole would have matched my imagination, instead of how it actually played on.

Something that I don't want to overlook in any case, and this comment is directed to all writers, is the use of the team, or more to the point, the use of Tara Lewis. She is a recurring character, and even if everybody has something meaningful to contribute, overusing her is a surefire way to anger the fans. She is being overused episode after episode, and she is slowly but surely on her way from a well liked character to a irritating, want-her-out-of-my-screen one.

In short, what should have been a 7-8/10 stand-alone episode in any fan's book, was destroyed by its creator when she robbed us of any intrigue whatsoever, killed our interest to the point that the out-of-the-blue reveals barely registered, and took out the chance of following the work of the team in detail, the later from lack of time because she had wasted too much showing what she shouldn't from the wrong point of view.

Disclaimer: while I may be able to put my thoughts in a mildly comprehensive text, I'm one of those people that can't write fiction to save their lives.

Now, knowing the above, would you have liked my version of this episode better or worse than what we got?