The scheduled reviewer for this episode ran into unforeseen problems called life. So I got the call off the bench to pinch hit and write the review for Nelson's Sparrow. Yes, you're stuck with me again for the second week in a row.

However, since I didn't know I would be doing this review, I had already made my feelings know about this episode in the comments section. So most you should know what I thought about it. For those you that don't: this episode of Criminal Minds was an out of the park homerun.

That said, I'll try not to repeat myself (no guarantees) and dig into this episode a little deeper. As I watched it for the ninth time to prepare of doing this (yes, you read that right; maybe a tip off on how really good I thought it was), there's three things on I want to focus on.

The first is the amazing and awesome script that Erica Messer and Kirsten Vangsness brought to the table. Who knew Kirsten Vangsness' incredible skills?! I just wish she'd spread her fairy dust around the writers' room, because she and Erica brought home one of the better Criminal Minds episodes of all time for me. 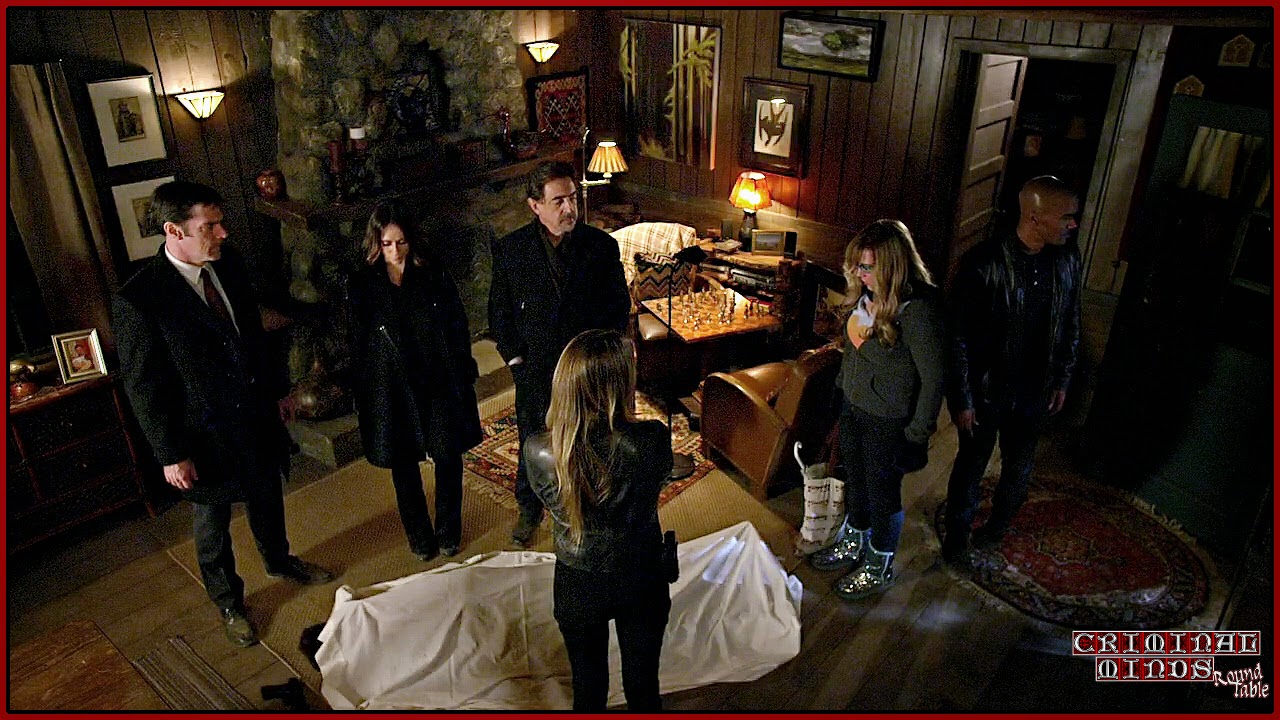 There's been some debate on social media if it was necessary for Criminal Minds to kill off Gideon. Whether you liked, loved, or have the opposite feelings towards the character isn't the issue for me; how well they did or didn't do it is my issue. That premise gave Erica and Kirsten an episode to show off the team, doing what they do best and why I love this show: the team being profilers.

The intro scene was brilliantly written; it had just five words and was one of the shortest I can recollect. Yet it was powerful and I was hooked. The concept the two ladies developed for that intro was sheer brilliance. I'll explain why later. 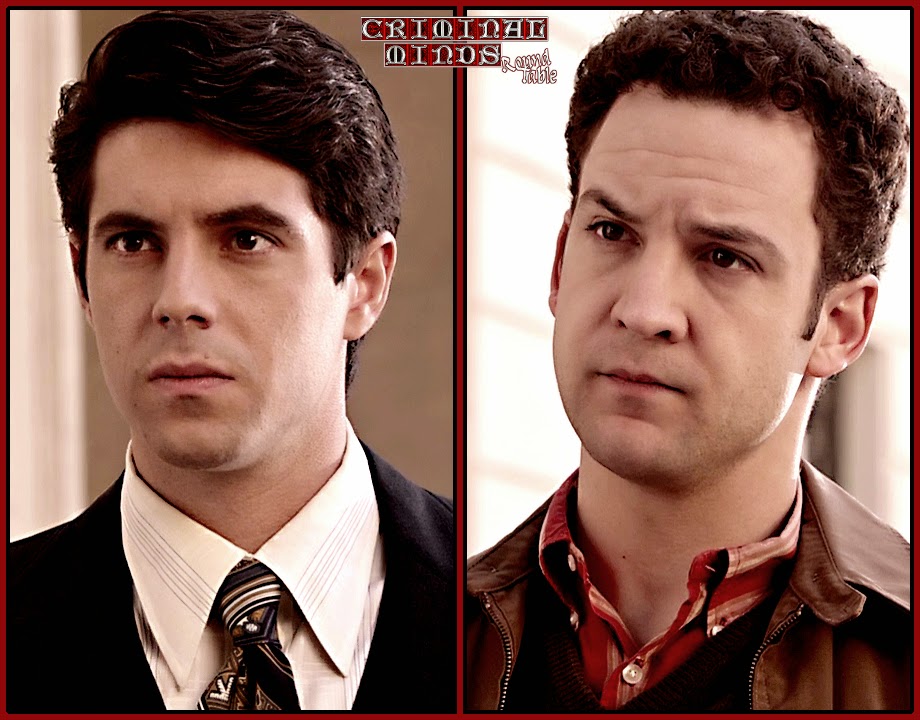 Ed Bernero always said he liked to drop "cookies" for us fans. Erica and Kirsten dropped a ton of them. Through this episode, we learned how the terminology all of us fans now know were developed. This came through the four flashback scenes with the younger versions of Jason Gideon and David Rossi. Kudos and huge shout outs to the casting department for both of those hires. Robert Dunne, who played David Rossi before in The Fallen and again in the one snippet scene in Anonymous, was a dead ringer for Rossi and well played. However, the four star performance goes to Ben Savage who absolutely nailed a young Jason Gideon.

Back on point; through those scenes we learned the evolution of the terms "serial crime", "unknown subject" and "signature". It was like taking "Criminal Minds 101"; the first class of understanding what this team does. And in the end, with Rossi talking to Gideon's son Stephen, brought it all home and scored. Why this team does what it does. It goes to the core of Criminal Minds; good men and woman leave home and family to make the world a better place for their family and everyone else's. They are our heroes. 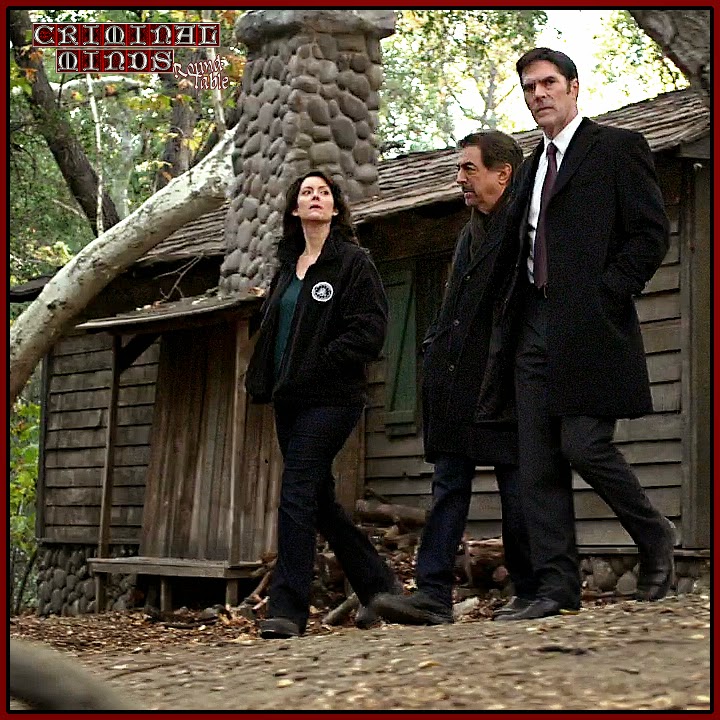 Beyond the flashback scenes, the team profiling was excellent. When is the last time we've had a Criminal Minds episode that featured the team, slowly building the profile, working off each other this much? It started with Hotch and Rossi in the scene with FBI CSU Agent Gina Sharp (great to see Gina back again!!) and played out to the scene in Pie Village with first Hotch and Rossi bouncing ideas off each other and then the team joining them. Everyone contributed to the profiling.


There were so many things I loved about this script:
And then there's the ice cream scene. I've read conflicting reports online about who wrote what scenes be it Erica or Kirsten. Either way, that scene played out so natural for those two characters.

Of course, it wouldn't be Criminal Minds if there wasn't an unsub involved. If I have one knock on the script it's that I knew from the get go that the wheelchair the unsub used was a ruse. And with the twisted unsubs are beloved team chases each week, Erica and Kirsten  upped the Ick, Ick and Ick level with every scene after another involving the unsub and his latest victim Josie. 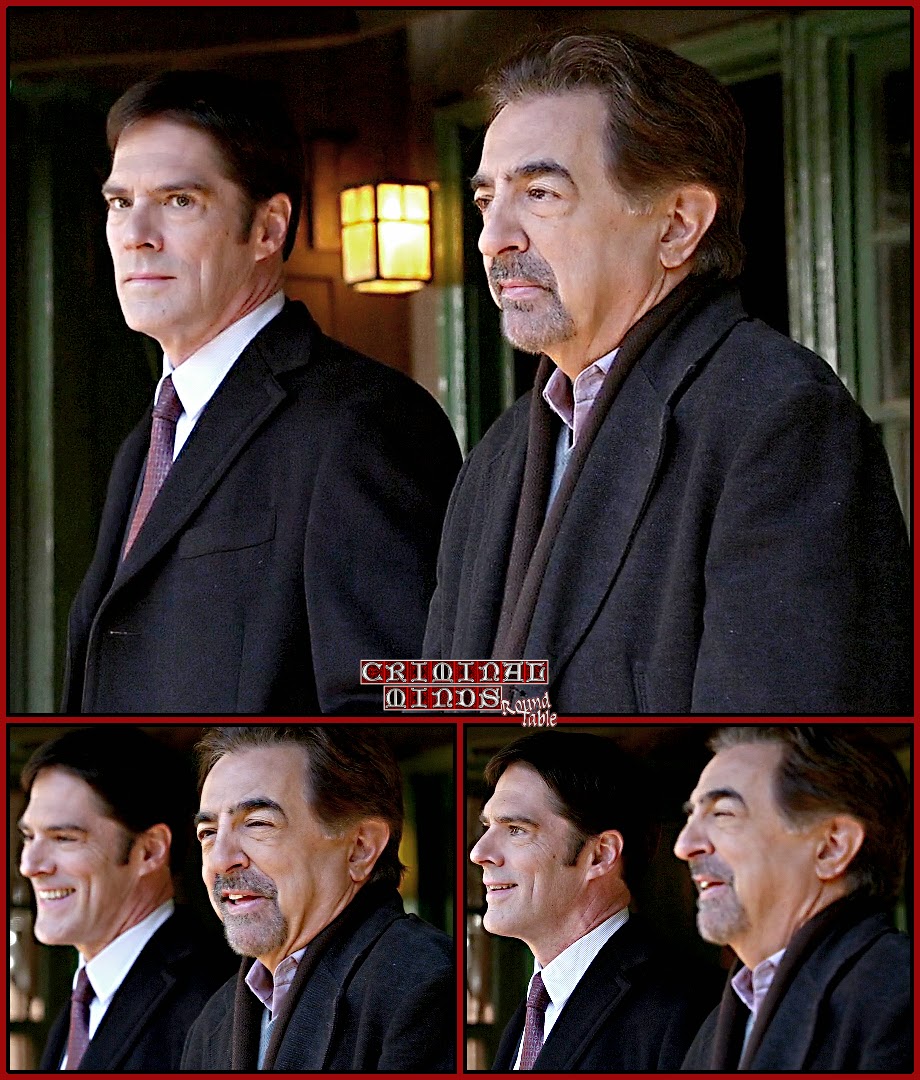 But I can't knock off Rockie grading points because I got not one, but three glorious scenes with my guys Hotch and Rossi having some wonderful ones together. I will admit to all: I didn't really start watching Criminal Minds every week in die-hard mode until Joe Mantegna joined the cast. His immediate connection to Thomas Gibson and how these two fine actors can work together, and off each other, showed in Joe's Criminal Minds debut in About Face. The monster one for me will always be the alley scene in Omnivore. Yet, the two of them didn't disappoint me again with the wonderful scenes they got handed. "Is this how it's going to go" Dave lamented. That was golden and set up the other two wonderful scenes of the two of them together.

That brings me to the start of the final scene with Hotch and Rossi on Gideon's porch. This Hotch fan girl got to see him smiling, then smiling broadly, then laughing. It immediately became one of my favorites.

This all leads me into the second point I'd like to make about this episode. One of the biggest complaints this Criminal Minds fan has is the lack of continuity that can happen with my beloved show. This episode NEVER missed one. I know; I darn near dropped over as well. 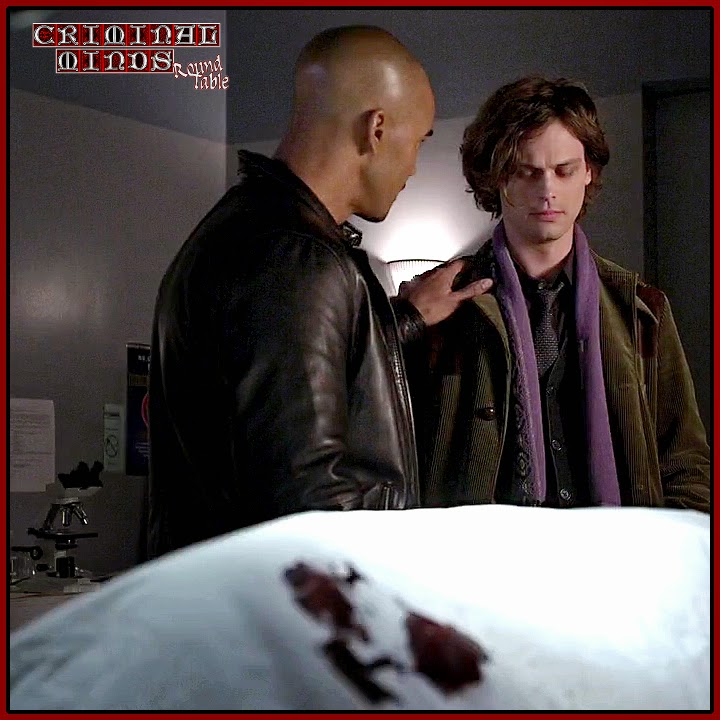 I said earlier that the opening intro scene was powerful. Erica and Kirsten may have penned that idea. But that was all Glenn and his director's vision. From the start with Reid's old car coming up the driveway, ala In Name and Blood (another continuity point) to his magnificent shot of the needle off the old vinyl LP record on Gideon's turntable to the transition shot of the chess board was astounding and floored me. And then add in his multiple shots of birds flying through the air, spooked by sound, plus one of the final scenes with Reid wanting to move a chess piece but couldn't do it; I can only shake my head at his true genius. I could mention so, so many more but I won't bore you. Glenn gave us fans a grand slam.

I think all of you know my grade of this episode by now. So I'll just end by apologizing for all of the baseball analogies. The US football season ended on Sunday with the Super Bowl. I need my sports fix. Baseball season is around the corner.

And for my dear friends that live in the northeastern part of the US, hopefully spring as well. If Criminal Minds keeps cranking out outstanding episodes like Nelson's Sparrow, we'll all get there. The groundhog be d*mned!