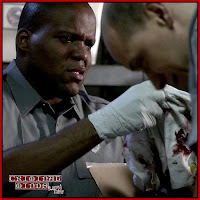 This episode was written by the wonderful Sharon Lee Watson and Directed by Félix Enríquez Alcalá, and let me just say the product that both gave us tonight was just amazing. I know that many have bantered around the term “Classic Criminal Minds” over the years. Some episodes this season were deemed to be that ‘Classic Criminal Minds’ type of episode. However, after watching this episode those others pale in comparison. Right out of the gate we got a great lead in the scene, subtle yet suspenseful as we could just feel that more was coming. Oh, those unsuspecting Guards. 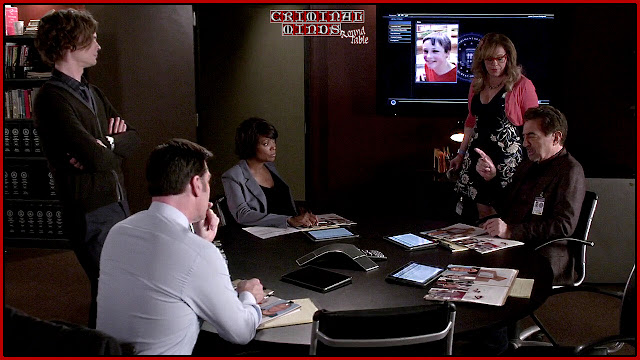 When we cut to the roundtable room it was all hands on deck and let me just say this, “Let the Profiling begin”. Sharon wrote each of these characters to perfection. Not one of them was over the top and all of them had input, and hail all the saints, we didn’t get the standard “Wheels up in 30” from Hotch! 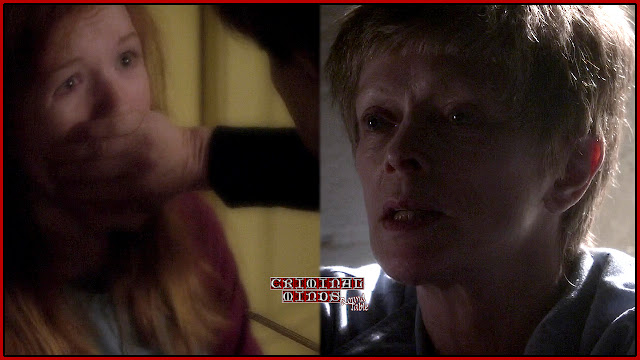 From the very first scene of Antonia Slade (Played by the formidable Frances Fisher), the creep factor about this Unsub rose 10 fold. She’s smart, you can see it in her eyes. She’s also coming across as fearless in the face of her confinement. As the warden found out quickly. She’s the captive and He was dismissed as a nuisance, demanding conditions for the FBI to talk to her. The flashback scene was done so well, we’re seeing what really happened and then with such a straight deadpan face she says “And I gave her a cup of mint tea". Believe me I will never think of Mint tea in the same light again!

All this and we haven’t even gotten to the opening credits. This alone told me how this episode was going to go, and trust me I was on cloud nine. 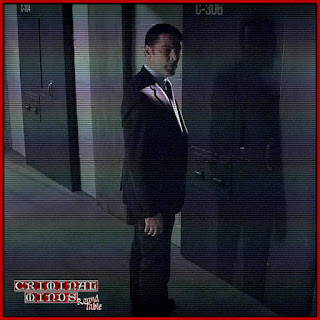 I have to say when first watched this episode I caught the subtle way Hotch looked at the camera outside Antonia’s cell. On the second watch though it’s almost like he’s checking out where the cameras are. I also noted that the warden was specific about not taking anything from Antonia nor giving anything to her, yet Hotch did take the paper she threw towards him.

“All work and no play makes Agent Hotchner a dull boy” 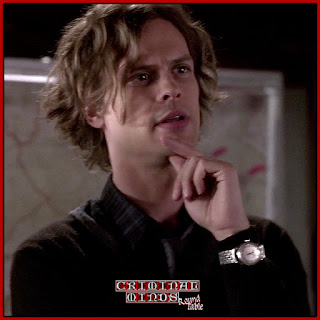 That was repeated three times on the paper Antonia threw at the bars, which has me believing that there is more behind that statement then even the BAU thinks at this point. And Hotch with Reid looking at the note and figuring out that there’s a bigger message contained within was done just right. But I digress. Reid pretty much sets the stage for these ‘interviews’ by upfront asking “why the mind games?” Indeed what is this woman after?

I have to say here that seeing each of the team running ideas between them all doing some old fashioned profiling made my heart go pitter patter. 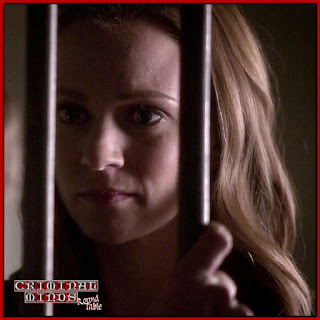 It’s at this point that I, and I hope my fellow viewers realize that the BAU is going to be feeding into Antonia’s machinations in order to get information that will lead them to the two missing boys. While of course I was a wee bit upset with JJ’s interview and Antonia trying to plant the seed that JJ should be running the BAU, once I thought about it I realized that I wouldn’t be prudent for JJ to denounce what she was saying, as that would have only made Antonia close off and the team wouldn’t get the information they needed. I can’t say this enough, really I can’t, the profiling in this episode was scarily good. It was all team, no magical revelations, no super agents riding to the rescue, just pure good ole fashioned profiling. I also liked that the team was able to work this case from their home base. The familiarity of the BAU made for paying attention to what the team was saying and doing easier.

Spencer Reid was excellent in this episode, not that I expected him not to be, but he was portrayed as strong, assertive in control. Not just as the simpering genius the team keeps around for the facts he carries around in his head. The scene between Reid and Slade, while sad because she touched on Morgan’s loss to Reid, also saw Reid standing his ground; Slade tried to play on his emotions regarding Morgan and I really don’t think he let her do that. I will say that I will never eat applesauce again. That scene where she draws on Reid’s palm after spitting the applesauce out was just... Eeeeeew!

Here we are about an ½ hour into the episode and we’ve not seen the ‘unsub’ who has the boys, all that much. Those scenes, the flashbacks, and the scene showing the boys still alive were perfectly placed to quickly fill in facts about what the team was profiling. Bravo again Sharon! Actually, I can’t believe we’ve gotten this much profiling, this much team in such a short amount of time. Whoever edited this episode deserves a raise! 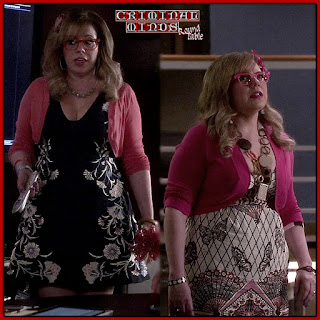 I loved how Garcia didn’t use her magic computer’s to find information, some of it was simply relayed to her from the prison personnel themselves. And Garcia looks magnificent in the outfit she had on. More businesslike, more mature but still absolutely within Garcia’s personality. Congrats to BJ Rodgers for that!

Throughout the whole episode, we’ll see Antonia, go one on one with team member and then we’re back in BAU room going over it, with members of the team profiling what it all means. THIS, my friends, is Classic Criminal Minds.

Back and forth like a game of cat and mouse this episode went. Just when I, as a viewer, thought one thing, a new road opened and they went down another path. I was in Criminal Minds heaven. I’m a thinker, and this episode had my brain in overdrive. So again bravo Sharon and Félix! So now we’ve come to the reasoning that time is running out. Those boys won’t survive unless the BAU gives into Antonia’s demands and sends her to Kentucky. But that’s not the end my friends. No, the BAU isn’t just letting her transfer, they’ve worked out that she wants to see these boys be killed, that they need her to find them. I loved Tara on the plane with Antonia going back and forth. Tara’s utter disdain for this woman is palpable.

Let me interject here the fact that yes, Hotch wasn’t in every scene. He was behind at the BAU, but he was very much running the show. Rossi, differing to Hotch over the phone about what they should do with Antonia’s demand to have the cuffs removed proves that. The split second decision Reid made to continue along the path Antonia was leading them on to some may seem like insubordination, but for me that spoke of his faith in their profiling. After all they were there because of that profiling. 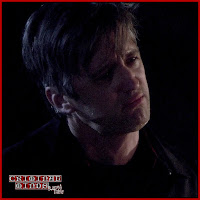 We come to the end of the episode. So far profiling was paramount and this ending didn’t stop that. WOW… Just WOW… again, I want to say that Frances Fisher was creepily good. And the actor who played Barlow was wonderful at the end. His facial expressions as he looked mournfully at Antonia right before he blew his brains out was great directing and editing. 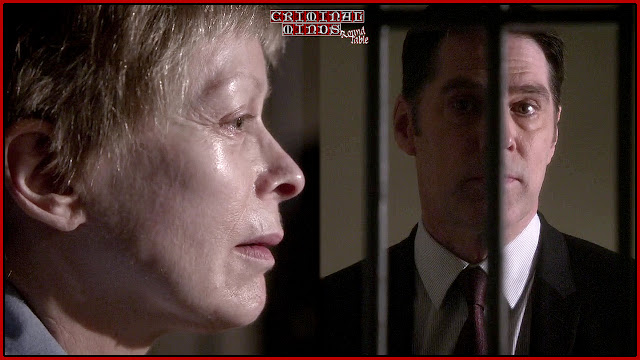 Now, we come to the closing scene between Hotch and Antonia. Thomas Gibson never fails to bring his best. Hotch laying out Antonia’s past, the fact that she was pregnant and the fact that her father killed her boyfriend, that her father punished her and made her give up the baby, that she was full of self-loathing, and not really a narcissist, was spectacular to watch.

How creepy was it with Antonia saying to Hotch:


“There’s a storm coming Agent Hotchner – And you’re about to be swept away.”

Lord have mercy bring on the finale!

So my final thoughts and grades. If for some reason you can’t guess I loved this episode, please get glasses... *LOL*

Now some of you may be wondering why only a 9.9 out of 10… That missing 10th is for CBS and the Heart Attack Factor they gave me from the promo! 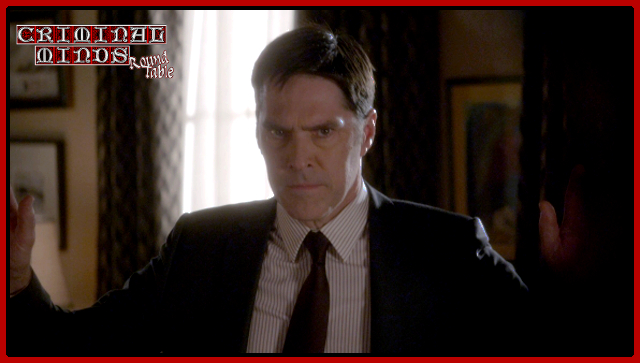 Bring on the Finale!

Thank you for reading,