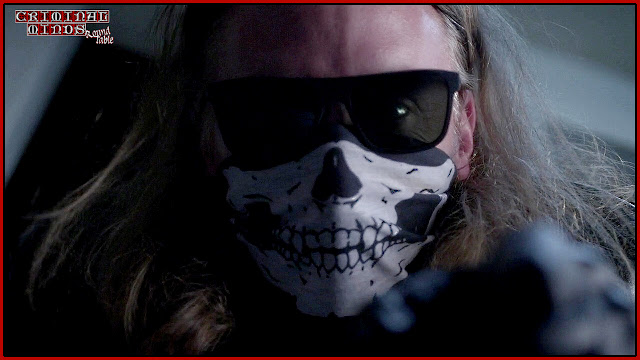 Virgil Williams wrote a somewhat compelling episode. This episode started off very well. We’re greeted with just a masked face and what appears to be a crime in progress. We immediately cut to the team in the round table room with Garcia explaining the case. We see the crime playing out as a visual of what Garcia is describing to the team. I thought this was a new and fairly effective way of showing the beginnings of the case, and at this point I was sure Virgil had managed to shake off the horror of what was 'Protection' and be back to his usual compelling stories.

Sadly I was mistaken.

As the discussion continues with the team we learn that six years prior to this, this exact MO was used and the team, while not called into the field, consulted with the lead investigators from Quantico. They had a profile, or at least the start of a profile. Not knowing if this is the same killers or a copycat, this time the BAU is going to Las Vegas, New Mexico.

While we don’t actually see the faces of the Unsubs at first, they are very much front and center throughout this opening. What we don’t know yet is what is driving them. I will say here I don’t like when we see the Unsubs from the outset but this episode had a sufficient creepy factor so far that I was willing to overlook it if things kept going on the positive curve it had been. 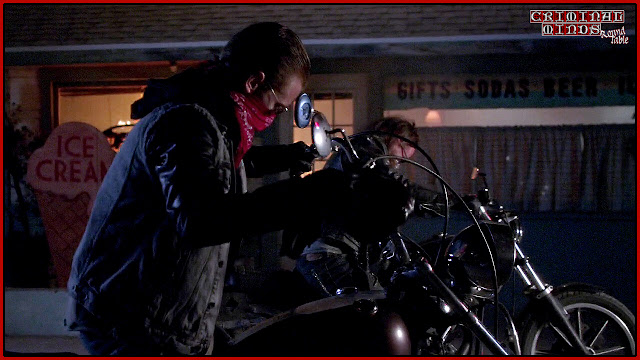 Alas, from the moment just after the first commercial break until the end we’re left with a story that had gaping holes throughout. Plot points that were unnecessary - showing the Police Chief ‘sneaking booze’ into his coffee and Rossi’s ‘tempered’ suggestion that he go home and sober up, was just unnecessary. That aspect of the storyline did ‘nothing’ to move the story forward or impart information about the case.

Then we’re left with the BAU Unit Chief going MIA for +90% of the episode, (yes I realize that Thomas Gibson was prepping for his directorial episode, which comes next, but HELLO folks!, good writers can make great things happen with limited time from the star of the show if they actually try to do so). Sadly Virgil, like many of this crop of writers, doesn't, can’t, or won’t do that. They take the easy way out and just don’t write for the character. 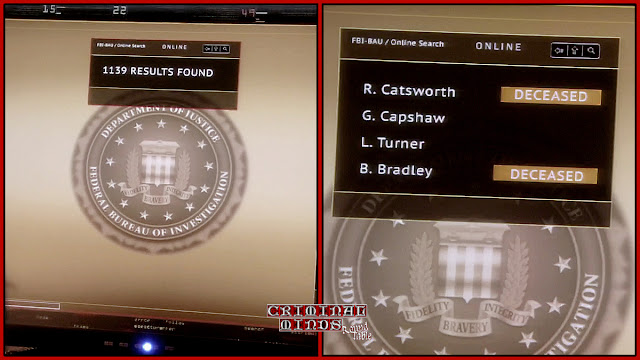 Then to add insult to injury, we are left with an overabundance of corny Garcia and her magic computer, as well as an attempt to recreate the magic that was the Genius of Spencer Reid in earlier seasons and failing miserably at it. The director missed the mark on this badly by showing close ups of Reid’s eyes and fingers as he worked through his thought process. Reminded me of that blooper reel scene where Matthew is making goofy faces while the others are trying to deliver lines.

There were so many ‘missed’ opportunities for this writer and director to up the quality of the episode, but sadly all were... missed. By midway through it we know who the murderers are, as well as pretty much their whole story as it has already been told through their eyes. Throughout I had flashes of commonality to several previously done episodes ('Identity', 'Hopeless', and 'The 13th Step' come to mind) and was turned off at the writer’s bad use of the Unsubs’ names (Really, 2 Unsubs named Mason and Turner? Was Virgil trying to channel the excellent 'To Hell and Back' to boost this one?) 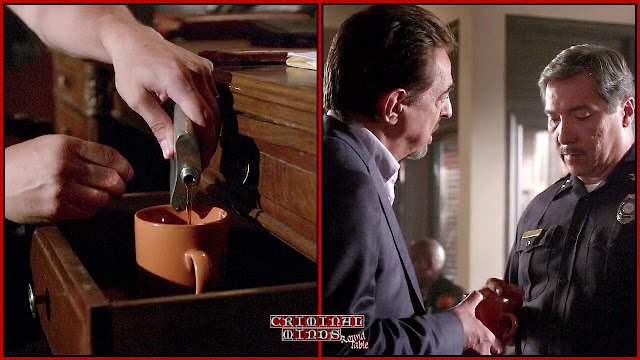 With regards to the Police Chief and his going home to ‘sober up’. In reading posts from around the ‘net’ I've seen comments about “did the drunk chief drive himself home? How could Rossi allow that?” “Miraculous recovery of the Chief to be able to make those sniper shots.” However for me, that whole plot point was just unnecessary and detracted from the team and the case.

I had thought this episode might turn around when we see Hotch and Lewis go to Dallas Prison to interview the Unsub's cell mate and we have Hotch telling the cocky bastard “Shut Up”. Sadly that was the best part of that scene. For me, while watching, I got the distinct impression that Thomas Gibson wasn't actually really in that sequence, but rather did voice over for Hotch's speaking parts. The camera showcased Tara Lewis with only a few brief glances of Hotch himself. Again, if Thomas wasn't available for a lot of this episode a really good writer will make good use of the time he or she DOES have with the actor on set. This wasn't done. And frankly without Thomas leading it the entire show falls apart. The other actors cannot carry Criminal Minds.

The rest of the episode is very predictable, too predictable for many probably.
I get it, I really do; Virgil said on Twitter that Thomas wasn't available on the set, but He had to be there at some point so why not use the star of the show and showcase at least ONE great scene. (The Sniper shots, Prison sequence?) I’m fairly certain that Thomas is professional enough that he would or could have flexed to make the writing of his character fit his schedule.

While the ending with the team attending the services for the murdered girl was sweet and heartfelt, it also didn't ring true for the team. There have been many victims that affected the team over the years BUT this was the first time that, together as a team, they attended the funeral services for a victim. I will say that the song 'Amazing Grace' was performed beautifully, kudos to Alaska Reid.

I’m sad because I want to find some good in episodes. But as long as the writers continue to have the Unsubs drive these episodes, it doesn't seem possible. When the writers showcase these transient guest characters rather than the main cast it is inevitable that the main characters become very beige and generic.

I realize that there are many fans across the net saying the same things I am over and over again. Maybe the definition of insanity is true? Hoping week in and week out that the writer’s will wake up and realize fans want to see episodes through the eyes and work of the TEAM, not some guest star playing the Unsub, apparently makes myself as well as many fans across the board insane to continue hoping.


Criminal Minds was always about an elite team of Behaviorists hunting the worst that humanity had out there. It was about the process they go through to uncover the why and what for that drives these criminals.

It was never supposed to be about the criminals telling the tale of how they got caught. I get that the writers want to showcase their creations (which is usually unsubs and guest cast roles) but the writers need to keep in the forefront of their minds that it is the FANS who watch the show, and watch for their favorite MAIN CHARACTERS, what keeps Criminal Minds on the air. It’s simple really: lose the viewers, lose your job.

My conclusions are this. Virgil had what should have been a fantastic episode with a very compelling theme. But sadly he fell short in the ability to capitalize on that storyline by writing bad plot points, underutilizing the main cast and allowing the guest cast to drive the story.

Thanks for reading this review.